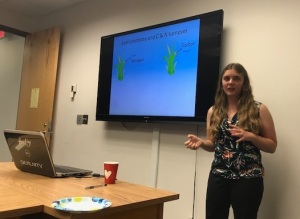 Sandy explaining it, owning it, defending it.

Congrats to lab member Sandy Voors on defending her Master’s degree! Sandy’s M.S. thesis is entitled “Linking Ecosystem Function and Phenotypic Variation in Spartina Alterniflora Salt Marshes”. Sandy did a great study examining the implications of trait variation in a foundation species (S. alterniflora in salt marshes) for the storage and cycling of carbon and nitrogen in marsh soils. She found a complex association among plant traits, soil biogeochemicial properties, and site effects across several marsh ecosystems. This work contributes to an emerging focus on the importance of populations and phenotypes within species as functionally important sources of biodiversity. Sandy was co-advised by Christina Richards, and did this work as part of a collaboration within Randall Hughes’ Marine Biodiversity lab at Northeastern U. Now that the defense is behind her, graduating in May is the next step!

This entry was posted in News. Bookmark the permalink.