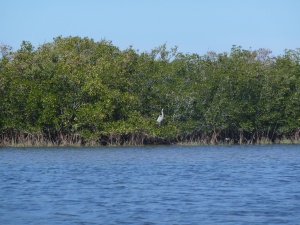 Mangrove ecosystems that depend on phosphate nutrients in the Everglades can be found growing over karst substrate at the ecotone between seawater and freshwater—ground zero for saltwater intrusion. (Photo: K. Jimenez)

Sea levels are rising on account of climate warming that is very real and very now. Most of us understand that rising seas inundate land, flood coastal cities, and threaten human infrastructure. Yet sea level rise has another less visible but perhaps equally dramatic outcome: the intrusion of saltwater into freshwater aquifers, ecosystems, and drinking-water wells. With salts come many chemical changes to water, and to the way water interacts with soils and sediments. Working in the karst limestone system of the Florida Everglades, Hilary investigated how saltwater intrusion affected the sorption and desorption dynamics of phosphate to and from sediments. Importantly, Hilary found that karst sediments lose their capacity to sorb phosphate at the very onset of saltwater intrusion, when the water interacting with sediments is <1% seawater! Rather, sediments desorb (lose) large, immediate pulses of phosphate as soon as they are hit with small amounts of seawater. These findings are critically important because they show that the chemical environment on which organisms and food webs depend is very sensitive to the unseen outcomes (e.g., saltwater intrusion) that ultimately arise from climate change. 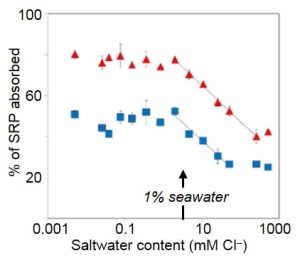 The ability of sediment to adsorb phosphate declines sharply at the onset of saltwater intrusion, when the water mixture is less than 1% seawater. The blue and red show phosphate adsorption on two different rock types. These data are from the second article in Hilary’s series (Estuarine, Coastal and Shelf Science 184 (2017) 166-176)

Hilary’s work also highlights the value of interdisciplinary cooperation, as she did her chemical analyses with the Lewis Ecosystems Lab while pursuing her PhD in USF Geosciences under Mark Rains.

This entry was posted in News. Bookmark the permalink.